How To Avoid Being Overwatch Banned in CSGO

There is a lot of misinformation about CSGO’s overwatch system. I figured that this blog post would be a good way to dispell some of these myths and provide some easy ways to avoid being convicted by Overwatch. Some of these methods will be accompanied by videos of the SmurfWrecker cheat, but a lot of them are possible using any cheat.

*NOTE: We recommend not using an account that has any sentimental value to you while using any sort of cheat. Even if you are playing totally legitimately, you might still get convicted.

One of the biggest pieces of misinformation surrounding Overwatch is what exactly it is.

Overwatch is a system designed by Valve where suspected cheaters will be sent to the queue. Once in the queue, your game will be watched by more experienced players, and they will have the option to convict you of cheating upon the conclusion of the game. Of course, each game must be watched by many people, all of them providing convictions, for you to actually be banned.

A lot of cheats love to talk about their bypasses. Many don’t shy away from claiming that you will never be banned in any way using their cheat. This is myth 1.

Myth 1: A cheat can bypass the Overwatch system

Fact: There is no way for a cheat to bypass Overwatch. No matter what they tell you or how many gimicks they employ, there is simply no way to bypass Overwatch. Even if they have you install it on a usb and only run it during a blood moon, you will still be susceptible to Overwatch. That is why it is so important to be knowledgable on how to avoid being banned by it.

Flaws of the Overwatch system

There are some flaws in the Overwatch system that can both help and hurt you. The major one is that the tickrate of the gameplays that they are watching is far lower than the tick rate in game. A tick rate is the number of times that the game updates per second. The lower that this number is, the more glitchy it looks.

Some advantages of a low tick rate:

Some disadvantages of a low tick rate:

In these instances, the low tick rate helps a lot. If you have aim smoothing on and keep a low FOV, you are far ahead of the curve.

How do you get sent to Overwatch?

You should never want to be sent to Overwatch, but it helps to know how exactly it can happen.

This topic brings us to myth 2.

This myth has become so prevalent because it used to be true. Since its inception up until a few months ago, Overwatch was based entirely on user reports. If someone in your game thought you were cheating, they would report you, and you would go to Overwatch. This is still the case, but now there is a second, far more effective way of being sent to Overwatch.

The second way to be sent to overwatch is by Valve’s new VACNet system. In essence, this works by monitoring your moves and guessing whether or not you are cheating. It is an artificial-intelligence based system, and is therefore fallible. The best way to avoid this is to keep your FOV low and don’t track an enemy’s head for too long if you aren’t using Aim Smoothing.

In summary, the two ways to end up in Overwatch are:

How to Avoid Overwatch (Legit Hacking)

The act of avoiding Overwatch is often called “legit hacking”. It is called that because your goal is to look as “legit” as possible, so that even if you end up in Overwatch you won’t be convicted. This, of course, is not as fun as normal hacking (in my opinion), but it will save you money on alt accounts in the long run.

Most hacks include some legit features for you. SmurfWrecker is no different. In this section I’ll outline these features and how they can be used to avoid Overwatch. Some of these may not be available in other cheats and some cheats might have others not included here.

Aim smoothing is a fairly ubiquitous legit feature, but one that is also often misunderstood. What it does is it puts a layer of protection between when you press the aim key and when it locks on. Instead of you pressing the key and your crosshair being immediately placed on the enemy’s head, it instead slowly moves your crosshair to their head. This has the effect of making your aim look incredibly natural, especially at low FOVs and with the low tick rate of Overwatch.

Change color on seen is a very interesting feature that was suggested by a SmurfWrecker user. When toggled along with the wallhack, as soon as you can see an enemy, their outline turns white. This is very helpful so that you never accidentally aim at someone that you can’t see, which can hurt your case in Overwatch.

RCS Intensity is a customization feature that we added. Instead of always shooting at exactly the same point with a perfect spray, you can tune this setting so that you spray within a certain radius of your choosing. This is especially helpful in Overwatch demos.

Aimbot FOV is another standard feature, but it is also one of the most misunderstood. Essentially, your player can see 360 degrees around them. Aimbot FOV means that you will lock onto any enemy, as long as they are within that number of degrees from your crosshair. For instance, if an enemy’s head is 3 degrees to the left of your crosshair, and you have an Aimbot FOV of 3 or greater, you will lock onto that enemy. This is especially helpful in legit hacking since you can choose to just get a little bit of aim help instead of a lot.

The aimbot mode or target is where on the body you want to aim. If you are legit cheating and using RCS, we recommend chest or arm, because with bloom it will give you a natural amount of headshots, something that many Overwatchers look for. You want to aim for 40% headshots or below.

Thru walls is a fairly straightforward aimbot setting. If it is turned off, the aimbot will not target anyone that you cannot see.

Now that you know what the legit features are, you still need to learn how to use them properly in order to not be banned. This is myth 4.

Myth 3: Using legit features will stop me from being banned

Fact: You can look like you’re hacking even with completely legit settings. You need to make sure that you are using the hack properly in order to look legit. It is not easy, but you will learn to do it with time.

This section will include using the SmurfWrecker cheat, but the lessons apply to a lot of different clients.

This is best demonstrated by the video below, but we recommend having an FOV of 3 or less as well as an aim smoothing value of 20 or less.

The main thing that people do wrong when using aimbot is to click and hold. Even with a low fov, the aimbot will track people very unnaturally. The best way to avoid looking like you are cheating is to manually bring your crosshair close to the enemy, then click the aimbot key in order to stabilize your aim, shoot or spray, and then release it. If the enemy starts moving, look for cover or otherwise attempt to manually track the enemy. Once he stops, use the aimbot to move to his head, and then execute him.

Recoil Control is a very powerful and enjoyable feature, but one that must be used sparingly. If you want to, you could spray an entire clip while mowing down an entire team of enemies. This, of course, would not look very legit.

For our cheat, we recommend keeping the RCS intensity at about half and only spraying about 5-7 bullets at a time. We also recommend turning RCS Reset OFF.

Wallhacks are one of the easiest cheats to conceal, but also the one that is most often caught. The trick to hiding a wallhack is to always be thinking about where you would be aiming if you didn’t already know where they are.

A mistake that a lot of people make is looking at walls a lot in order to see where enemies are. Even if you’re not actually aiming at an enemy through the wall, unnaturally looking at walls will look very suspicious to Overwatchers. What you want to do to avoid this is, even when looking for players, always keep your crosshair aimed at an entrance or other place where they might come from. This is shown in the video below.

Also, we recommend turning the Change Color on Seen ON. This will make it much easier to not prefire, because you will know exactly when you can naturally start shooting.

Overwatch is a very good system for identifying cheaters, but it is also very easy to circumvent. As long as you use common sense and these tips that we have provided, it should be no hardship for you to both annihilate your opponents and remain ban-free.

Have any questions about this article? Send us an email at smurf[email protected]! 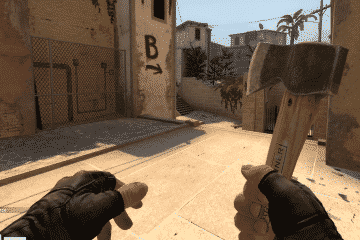 How to use the Hammer, Axe, and Wrench in CSGO Competitive

How to use the CSGO Danger Zone Battle Royale Hammer, Axe, and Wrench in CSGO Competitive   As you know, there are many things in CSGO that you can’t use in Competitive. With the release Read more…